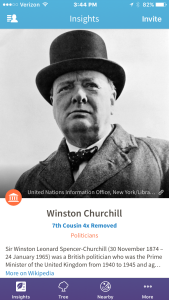 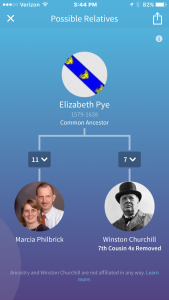 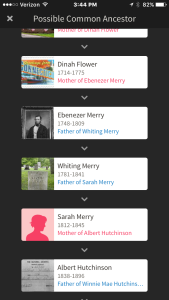 According to the We’re Related app from Ancestry, I am related to Winston Churchill (7th Cousin 4x Removed).

Our common ancestor is Elizabeth Pye (1579-1638) — but it takes me 11 generations to get to Elizabeth. According to Ancestry, my ancestor, Albert Hutchinson is the son of Sarah Merry. If I can verify this relationship, it would extend my tree a generation and add the MERRY surname.

Currently, I am stuck on Albert Hutchinson. Albert Hutchinson married Julia Harding in 1859 in Black Hawk County, Iowa. According to his military record, Albert was born about 1838 in Northhampton, Fulton County, New York. Albert consistently appears in census records starting in 1860 thru 1895 in Iowa, Missouri and then Kansas. However, neither potential parents or brothers have been found in these records. 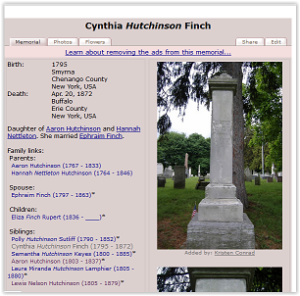 According to Find A Grave, Cynthia Hutchinson Finch (#14430101) was the daughter of Aaron and Hannah (Nettleton) Hutchinson and sister of the Aaron Hutchinson who married Sarah Merry. If the 14 year old Albert Hutchinson was the son of Aaron and Sarah (Merry) Hutchinson, then Ephraim and Cynthia (Hutchinson) Finch would be his aunt and uncle.