Even though I’ve been adding sources to events in my family tree for years, I hadn’t written a ‘proof’ argument until the last month. For my first proof argument, I decided to write out my reasoning behind my great-grandfather’s name: Washington Marion Crawford. 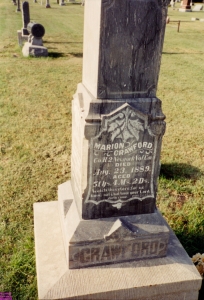 When I started researching my family, my grandmother was my primary source of information. Even though she married into the Crawford family, she knew a lot about the family. Besides the photo albums, grandma took me on a tour of the cemetery. Since I grew up knowing about what I considered to be  ‘the’ family plot, I was surprised when she showed me other plots containing my great-great grandparents. The Crawford plot for my great-great grandparents was where I first encountered the ‘mystery of the name’. The tall family stone showed my great-great grandfather as Marion Crawford. Even though my grandmother had not met him, she knew of him as Marion Crawford. Near the tall headstone was a military stone – with a different name: Wash N Crawford.

Thus started the quest to figure out his name. Over time, I collected a wide variety of records using different variations of his name. For my proof argument, I decided to look at those records again and see how each record recorded his name.

Based on the fact that all of the legal documents (marriage license, military record, coroner’s report, etc.) use the name Washington M. Crawford, I have concluded that his first name is Washington. Based on the fact that an obituary and the resolution for the GAR post identify him as W. Marion Crawford, I have concluded his middle name is Marion. Thus, I believe his legal name was

even though family often referred to him as Marion Crawford.