Earlier this month, Ancestry issued a statement about issues users were experiencing on the site. According to the statement, those issues included Ancestry search. They included an expected resolution date in their statement. That date is tomorrow, May 31, 2018. 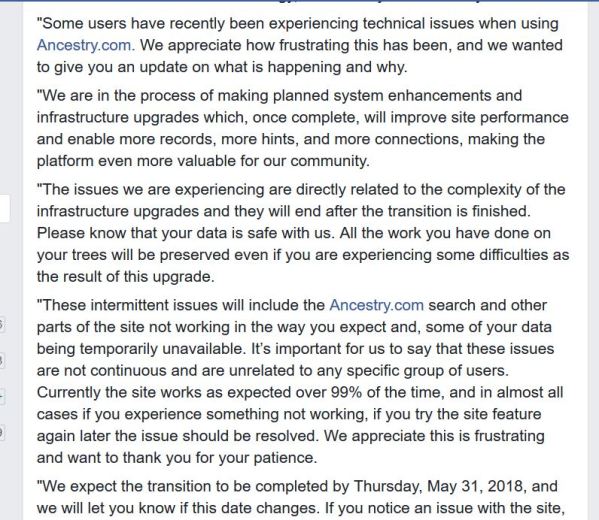 I’ve called Ancestry multiple times on this issue. Each time, support has confirmed that public member trees were last indexed in October 2017. This is an ongoing issue! My blog post, “Ancestry Indexing Saga Continues” contains a lost of blog posts on the topic. 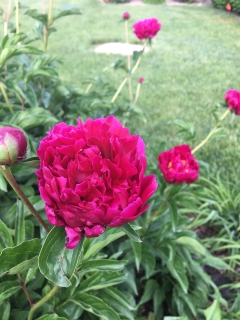 As a child, Decoration Day started with mom going out to the back yard and picking flowers – particularly Peonies, Iris and Sweet William. My grandmother would do the same thing from her flowers. In addition, my grandmother would order Peonies from the grocery store. She would keep those Peonies in the refrigerator. Those Peonies would be set out the night before so they would open up.

Preparation for the day would have included digging out the vases — but more often coffee cans. The coffee cans were wrapped in foil. Then some sand and/or rocks would have been added to the bottom to add weight. The digging out also included finding the wire hooks to hold the vases. If these hooks could not be found, then new ‘hooks’ would be made from wire hangers.

Mom would take the Sweet William and a small white vase to prepare flowers for my brother’s grave. My brother, Duane Gail Crawford, was a day old when he died. His small grave was in the Crawford plot along with my great grandparents and other relatives.

Once the flowers were ready, we would all go to the cemetery. There we would help carry items to the plot and carry water for the vases. I’m sure my grandmother told us how we were related to the graves we were decorating. This was the beginning of my genealogy education!

In honor of Memorial Day, a group of bloggers initiated the “Honor Roll Project“. As stated on the project home page,

Just find a military honor roll in your hometown park, or in front of a civil building, or inside on a plaque – Anywhere!  Photograph it, transcribe the names and post it to your blog.

There are several ‘military honor rolls’ in Seneca, Kansas. The most prominent one is the wall on the East side of town. 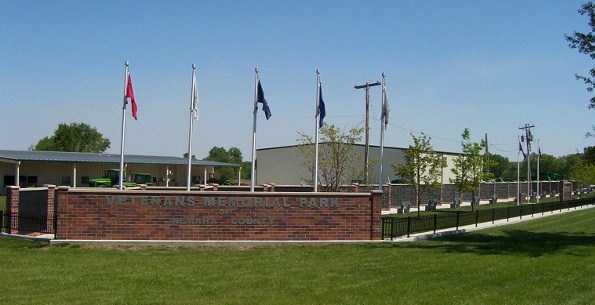 About two years ago, I photographed the wall. Although not the best photos, they have been shared in an album on the Nemaha County Historical Society‘s Facebook page. The album is titled, Seneca Military Wall.

I have been working on transcribing all of this info. The Civil War portion of the wall has been transcribed into a spreadsheet and shared on the web page: Civil War (and Earlier) Names on the Wall. For a more complete list of names on the wall, see 2018-05-28-Military-Wall. (Note: transcription is NOT finished!)

I invite everyone to participate in the honor roll project! Find your relative’s name on a flag post, roll of honor, or other military memorial. Take a photograph, transcribe the info and share using the hashtag #honorrollproject.

Let’s flood the Internet in honor of those who served!

I’ve been doing genealogy for some time and have been willing to share my info — even publicly on the web. Unfortunately, when I find my work posted by someone else without giving me credit or even contacting me, I get perturbed.

Today, I ran across my work saved as a story for Mary Thurston. 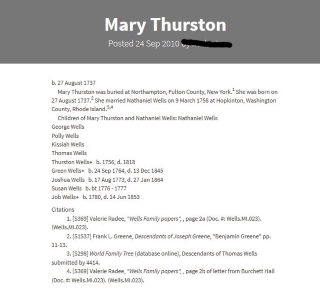 I realize that this info isn’t all that unique and could come from many other researchers. However, the citations point to my work. A long time ago, I started using the Dollarhide numbering system. Thus, when I see “Wells.MI.023”, I recognize my work.

Knowing that this came from my site, I decided to try and prove it. I went to the Wayback Machine and searched for my domain, heartlandgenealogy.org. Using that URL, I was able to find a 2016 copy of my site. On that version of the site was my info for Mary Thurston.

Not only was this info copied from my page, it was shared by several other researchers.

This isn’t the first time I’ve encountered my work shared by others. Not only have people copied the stories from my old site but they have also copied and shared the photographs.

Unfortunately, the person who originally copied the information did not include a citation or any attribution to the original author. The lack of a citation prevents other users from connecting with me. Thus, I am prevented from working with them to add to the family story.

When you find an online genealogy, please give credit to the poster of the genealogy so that others can connect with the author.

Although my grandmother lost contact with her first cousins, DNA is allowing me to reconnect with some of those Hutchinson cousins. I have a couple of matches that Ancestry classifies as 3rd cousins. Shared matches hinted that these ‘3rd cousins’ are Hutchinson cousins. One of those matches did not have a tree but provided me with her parents’ names, Thomas and Jeanette Hutchinson. According to my DNA match, Thomas Hutchinson was born in Missouri in 1929.

In my research, I had a Thomas Hutchinson born in 1929. I had this Thomas as the son of Thomas G. Hutchinson and Minnie E Hanson. The primary source for this relationship was the 1940 census record for Thomas Hutchinson living in Ward 8, St. Joseph, Buchanan County, Missouri (sheet 19A) 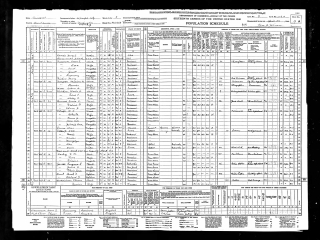 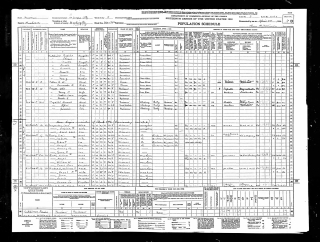 Unfortunately, I did not have enough research to prove that the Thomas in my research was the same Thomas as my match’s parents. Since I shared enough DNA with my match to indicate that we could be 3rd cousins, I started trying to prove/disprove a relationship between the two Thomas Hutchinson’s. 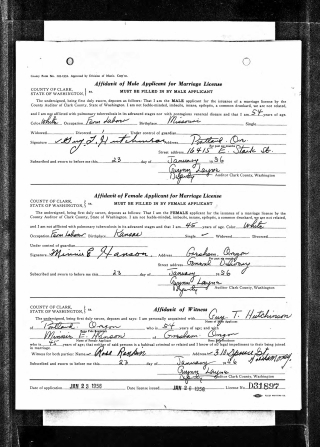 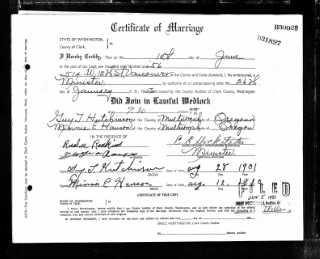 With Rosalie Rankins as the witness on the marriage license, I began to wonder whether the Thomas G. Hutchinson in the Missouri records was the same person as Guy T. Hutchinson in the Oregon/Washington records. Sine the 1940 census indicated that Thomas G. Hutchinson’s wife was named ‘Minnie’ I also began to wonder whether the Minnie of the 1940 census was the Minnie Hanson of the marriage license.

An obituary transcript for Mrs Minnie E Hutchinson from the 19 Dec 2000 issue of the Oregonian (courtesy of Genealogy Bank) supports the theory that the Minnie of the 1940 census is the same Minnie Hanson of the marriage record.

Interment will be in Forest Lawn Memorial Park. The family suggests remembrances to Full Gospel Community Church in Milwaukie.

Another document that supports the concept that the Minnie Hanson of the Washington marriage license had previously been married to a Hutchinson is the 1943 obituary of Minnie’s brother, James Hanson. This obituary includes Mrs. Minnie Hutchinson as a sister of James Hanson. (St. Joseph Union-Observer, 13 Aug 1943 – found on Newspapers.com) 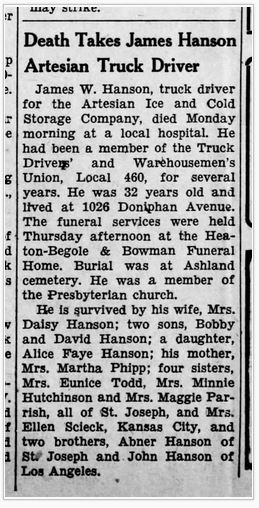 My next step is to try and locate a Hutchinson-Hanson marriage record in Missouri (or Kansas). I also need to check for land records for Thomas G. Hutchinson in Buchanan County, Missouri. If Thomas Hutchinson owned land in St. Joseph, then the sale of that land might show that he moved to Oregon.

I will also continue researching the children of Thomas and Minnie. Hopefully, I will acquire a ‘preponderance of evidence’ to support my theory that Thomas G. Hutchinson and his wife Minnie are the same couple as Guy T Hutchinson and Minnie Hanson.

In honor of National Train Day, I thought I’d share some info about our railroad heritage. One of first documents I have regarding railroad employment is a letter of recommendation for Judson Crawford. Based on the condition of the letter, I’m guessing that Judson carried it with him. 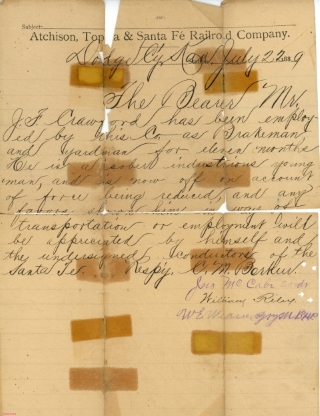 (Original in possession of author)

The Bearer Mr.
J.F. Crawford has been employ-
ed by this Co. as Brakeman
and yardman for eleven months
He is a sober industrious young
man, and is now off on account
of force being reduced, and any
favors shown him in ways of
transportation or employment will
be appreciated by himself and
the undersigned conductors of the
Santa Fe. Respy C. M. Borkur
Jno McCabe Condr
William Ril[ey]
WE. Weaver [Zmsm] B.H.P.

In March of 1900, Judson was assigned as a conductor on a freight crew between Dodge City and Coolidge on car 81. (Globe Republican, 15 Mar 1900 on Newspapers.com) 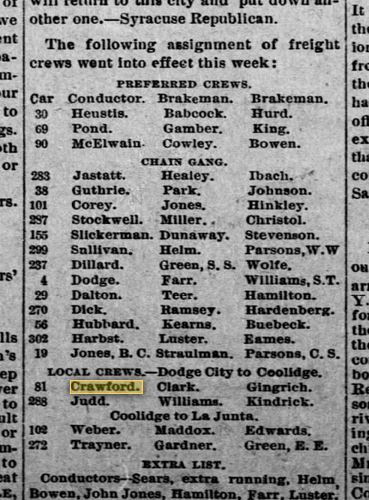 The Globe-Republican reported that J. F. Crawford filled in as yard master in Aug 1907. (found on Newspapers.com)

The 1920 Dodge City directory indicates that J. F. Crawford was a switchman for the AT&SF railroad. 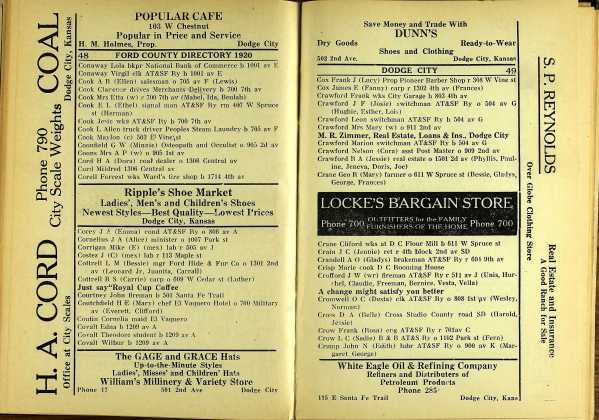 Judson’s sons Leon and Marion joined their father in working for the railroad after returning from their service in the U.S. Army during World War I. Marion Crawford lost his life in a railroad accident in June of that year when he fell under the wheels of an oncoming switch engine. 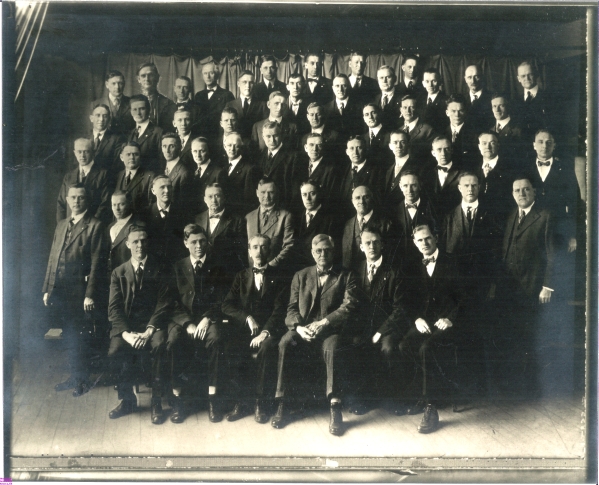 Judson retired from the Atchison Topeka and Santa Fe Railroad in 1936. 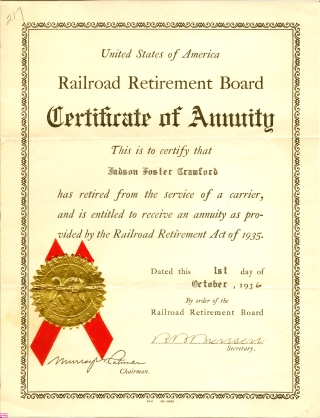 Judson’s son, Leon Crawford stepped down from a switch engine for the last time in 1960. 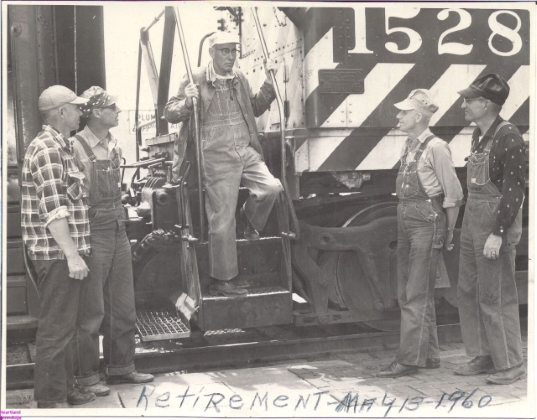 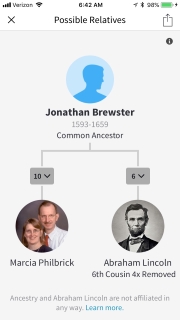 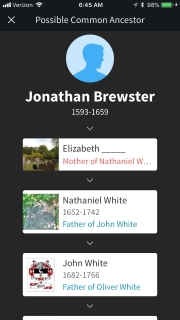 If I could prove that the We’re Related app was correct, then I would have my link to a Mayflower passenger. A quick glance at the app showed my link to Jonathan Brewster going thru Abigail White’s line. Abigail was the wife of Green Wells and mother of Ozias Wells, my 3rd great grandfather.

My research on my White line is based on family papers I received from Michigan. At this time, I have not done a thorough search for records to support these papers. However, these papers do support the lineage given in the We’re Related app back to Deacon Nathaniel White.

I haven’t given up on having a Mayflower ancestor, but I don’t believe I’ve found a valid connection.