Home » Ancestry » Is It Fake News?

Have you ever heard anything that sounded too good to be true? Have you ever believed something to only find out that Snopes.com says it is false? I know I have — both in my Facebook timeline and in my genealogy.

Thus, when I saw that there were parents for my ancestor, James Crawford on Family Search, I so wanted to jump up and down with joy. Not only are the parents identified, but so are the siblings. 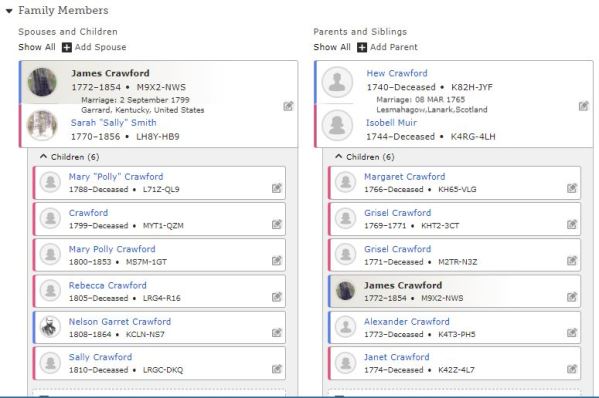 This is fantastic news! However, the skeptic in me asked, “Is this really true or is it just ‘Fake News’?”

Thus, I started looking for the sources behind the relationship. The only source attached that supported the parent-child relationship was a christening record for James Crawford found in Scotland, Births and Baptisms, 1564-1950.

According to the 1850 census, my ancestor was 78 years old and born in Virginia. My ancestor, James Crawford, married Sally Duggins in 1799 in Garrard County, Kentucky. These two sources along with the history of other Crawford families in Lincoln, Madison and Garrard counties Kentucky prior to 1800 are the basis of my theory that my ancestor was born in Virginia and not in Scotland.

I also wondered whether there was DNA evidence to support Hugh Crawford as the father of James Crawford. Fortunately, I am managing some yDNA in the Crawford Family DNA Project. I didn’t remember any close matches who had a Hugh Crawford line. When I checked our ‘group’, I didn’t find any Hugh Crawfords in the group.

My list of yDNA matches does include someone whose line goes back to a Hugh Crawford. However, our genetic distance is EIGHT at 111 markers.

At this point, I don’t believe the DNA evidence supports Hugh Crawford as the father of James Crawford.

At this time, my conclusion is that James Crawford was born in 1772. Thus, he could not have been christened in 1768 in Scotland. Based on my conclusion, I changed his birthdate back to the 1772 date and removed the Scotland Baptism record from his list of sources.

Without the Scottish baptism record, there isn’t any evidence that Hugh (or Hew) Crawford is the father of James Crawford of Preble County, Ohio. Since one of the other descendants is more knowledgeable of how to edit relationships on Family Search, I’m going to let her attack the parentage issue.

One thought on “Is It Fake News?”